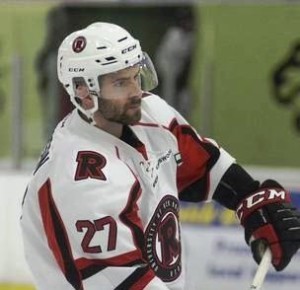 No no, wait, you didn’t open the wrong message. This is the UNB Red Bombers’ newsletter.

We are only 100 days from the kick-off of the 2019 season and we are excited about getting underway. As we get ready for the Red Bombers Reunion at Homecoming Sept. 28th for the 10th Anniversary of the return to campus, and the 70th Anniversary of the team,  we thought we would share some exciting news. News that we believe deserves to have credit and appreciation shown to UNB Athletics for its leadership on campus.

You have probably noticed the new logo on the jerseys and helmets of UNB’s varsity teams (as above). UNB Athletics has extended the use of The Reds logo [below] to be a symbol of all UNB Teams, Varsity and Club alike, at the Clubs’ option and without the Clubs having to give up their unique identities. We are still the UNB Red Bombers as are for instance, the UNB Ironmen the men’s rugby team, but the REDS symbol unites us all as UNB athletes. It has excited athletes across the entire Campus. 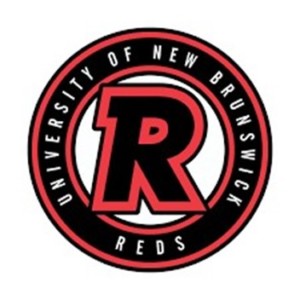 Players from different UNB teams wearing for instance their team golf shirt, hoddie or jacket to class are now all recognized as UNB athletes whether playing for a Varsity Team or a Club Team.

As with UNB Hockey, we have chosen that the

will be the decal on the side of the UNB Red Bombers helmets, and of course our jerseys will still display RED BOMBERS. Our current logo which we adopted in 2015 (seen on the helmet in the photo below L.) will continue to be our football logo used in co-branding opportunities. The Men’s Hockey team for instance has begun to use the Red Devils co-branding on occasion (as seen in the photo below R). 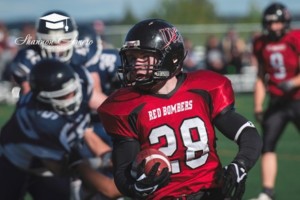 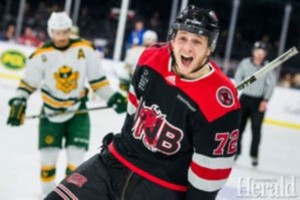 Red Bombers Football has taken its place as an active part of the entire football community in the Capital Region. Over the past 10 years the UNB Red Bombers have raised nearly $50,000 through in-game promotions for the Fredericton Kins Club (formerly Kinsmen), and Women’s Football, as well as provided skills-camps for young football players.

Our goal is not just to produce a Saturday afternoon football game, but rather to create a Saturday “Event” for the whole family that includes the game, half-time events, Kick, Punt, and Pass contests, music, lively play by play, etc. Tickets are free to students and kids, and adult admission prices are kept to $5. A family of 4 can enjoy 3 hours of college football, treat everyone to burgers or hotdogs, soft drinks for the kids, and a couple of beers for Mom and Dad, all for under $10 per person.

Every year, Red Bombers Alumni and Red Bombers Fans answer the call to ensure football is permanent at UNB and that the traditions of the UNB Red Bombers 1949 – 2019 are never forgotten. This year especially with our equipment replacement requirement, we hope you can help. The Red Bomber 100 Roster is where Red Bomber alumni and their Fans pool their contributions to The Red Bombers Football Club in an annual effort to equal a total of 100 Player’s Fees. Donations can be made on a one-time basis or you can set up a recurring monthly gift. Any level of support is welcome, for example, a monthly gift of $10. (the equivalent of a large coffee per week), becomes an annual contribution of $120. Your donations are also eligible for a tax receipt from UNB.

If you are interested in joining our Red Bombers 100 Roster, simply visit this secure website https://donations.helpforcharities.com/unbdonation/?dept_id=redbombers  When making your gift simply select Red Bombers Football Club (96AO5) from the drop down list. If you have made a recurring gift and wish to check on its status, call (506) 458-7594.

The Equivalent of a large coffee per week 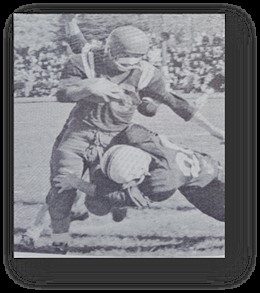 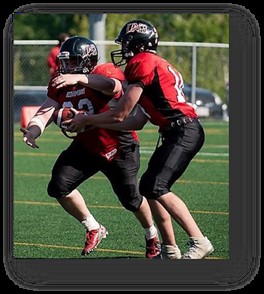